The creation of this image began when we first met Chloe and she shared her story with us. We were deeply moved by their loss of the previous baby by miscarriage and the extra significance that it brought to this new pregnancy. This meant that not only did their art need to celebrate the joy and excitement of the new baby but also remembrance of the one they loved dearly and lost all too soon. Chloe is a very kind, friendly and resilient person who has endured through sorrow and uncertainty. She told us about how they had gotten to see their baby boys tiny fingers and toes on the last ultrasound and how hard it had been for Dad and older sister as well. She hopes that sharing her story will help other mums who have had similar experiences feel that they are not alone in their pain and feel validated in something that is not often given the acknowledgment it should.

When it came to the shoot there were a lot of features and elements being applied which were beautiful yet seemingly random to everyone except Chelsea. Everything had a purpose; the gold against the black displaying beauty, strength and celebration while coming out of a place of darkness and pain. The chaotic movement of the gown representing the memory of the turmoil they experienced, while even the rounded shape behind them is echoing the previous pregnancy. Contrasting the movement of the golden fabric is their still and sturdy appearance symbolising strength and courage. Their posing and expression is that of sorrow not only for the lost child but also love and connection for the new baby which is now a healthy baby girl.

Of further importance is that October was Pregnancy and Infant Loss Awareness Month which was first declared by President Ronald Reagan on 25 October 1988.

On that day Reagan said:

Reagan continued to say that he wanted the world to gain awareness of this significant pain and loss experienced by so many across the world, and to provide resources to those who need them. There are so many amazing organisations out there that provide services to help those who need it, such as Sands, Heartfelt and NILMDTS, all of which are there to help heal and provide support. Photography is just one way that grieving parents can remember and cherish their memories, even the painful ones, so that they can feel connected to all their children.

Newborn family portrait including remembrance of the baby boy by the neck tattoo and the angel wing necklace worn by baby Amaia.

Art often captures the beauty in pain and loss, allowing the viewer to experience the art in their own personal way. Capturing the loss of a child in subtle ways for parents, within their photographic session, allows them to honour their lost babies with a beautiful celebration of life that they can display and cherish forever. Chloe has expressed huge thanks for her beautiful photography and how much her family and friends love the images and we are very grateful to have had the opportunity to create it for them.

Chelsea Haworth Photography is proud to have been a finalist for the maternity category and is the only New Zealand photographer to achieve a Gold award in this category. She also achieved 4 Silver and 7 Bronze Awards for her Maternity and Newborn photographic entrances for the 2018 Rise International Photography awards in Brisbane Australia. The international event celebrates maternity, birth, newborn, baby, children and Family Photographers from across the world. Founded By Kelly Brown and Newbornposing.com, the RISE awards are open to photographers worldwide and Chelsea entered in the inaugural running this year having heard about this competition from her connection to Kelly Brown, whom she met on one of Kelly’s newborn photography workshops back in 2014.

Entries are scored out of 100 with Gold being in the 90-100 range. Winning a gold award demonstrates extraordinary visual communication and creativity with outstanding technical skill. The combined judging experience across the 6 judges and chair person was 86 years.

This was the first image in the competition to be awarded gold and one of only two that scored a gold straight away in the first round of scoring.

First place in the maternity category scored only a 93, just 2 points more than Chelsea’s Gold award image. Second and Third place also scored 91, meaning there were mere decimal points between places and Chelsea’s image was shy only a few decimals!

Some of the judges comments for this image were; “I love the flow of the fabric, the posing. It’s really sharp, sharp & soft. On the right hand side I see the pregnancy mirrored in that fabric. I think it’s been really well handled, very nice.” “I absolutely love this image.” 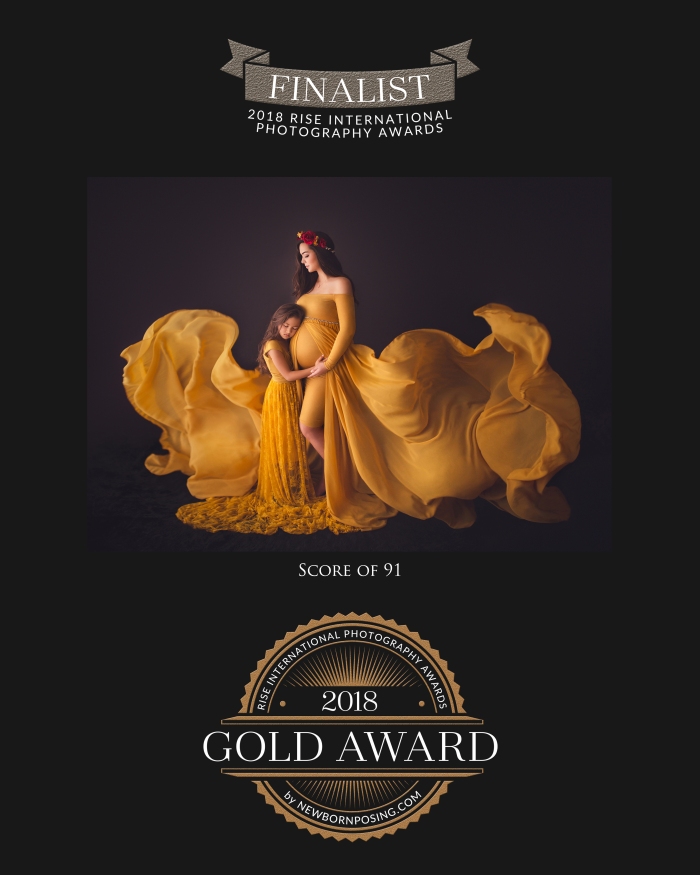 The story behind the image of Chloe Green and her daughter Kiara: The expression of sadness through the faces and posing of both mother and daughter are done deliberately to show the pain and loss of their previous baby by miscarriage. They had actually fallen pregnant with their 3rd baby when they were due for their second, of whom they had lost the year before. The chaos of the Golden gown represents the previous pain and turmoil that they had experienced with the loss of their previous baby, as well as imitating the pregnant belly shape to the right (behind them) symbolising the previous pregnancy which is both painful and beautiful. Their still appearance brings attention to their calm exterior which shows their courage and strength despite the chaos and turmoil they’ve been through. The colours chosen are to symbolise both beauty and strength while coming from a place of darkness and pain. The purpose of this portrait was to remember their pain and loss while also celebrating their happiness and bright future ahead, in order to grieve and process their pain in a healthy and comforting way.

Founded in 2012 Chelsea Haworth Photography tailors family and portrait sessions with a focus specializing in Maternity and Newborn and a vision for Maternity to be bold brave and beautiful. Always honing her craft, Chelsea looks for ways to innovate and improve her services to achieve global award level photography for her clients, including attending and hosting workshops with some of the best Newborn photographers in the world. Constantly striving to improve her art and produce the best products for her customers, Chelsea is very proud to have won these International awards. 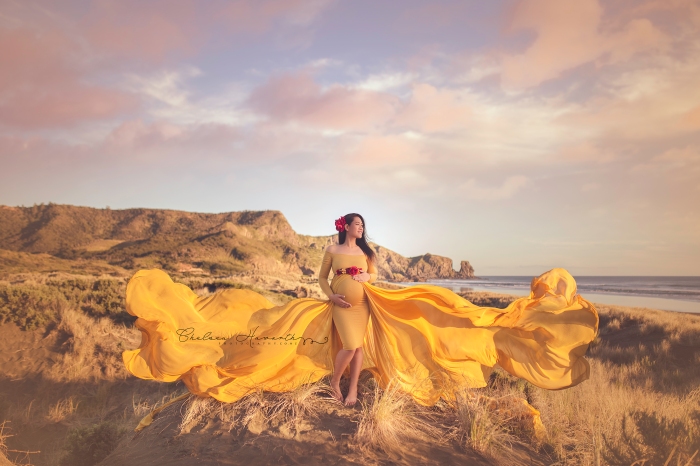 As an award winning photography studio of expectant mothers, newborns, and families in Auckland, we understand the patience required to keep young children entertained! Fortunately, Auckland is packed with family-friendly days out and activities to entertain babies and toddlers right up to the adults! It’s crucial to find the perfect setting to capture the most intimate moments in your life, luckily New Zealand provide ample inspiration.

The Auckland Domain is a beautiful park with walkways canopied by overhanging trees. It also features a Winter Garden observatory, and babies and toddlers will especially enjoy the duck pond, which has its own fountain. We love going to the Auckland Domain for work and for family time!

Auckland is an extremely photogenic city, which keeps us camera busy clicking all year round. But she also loves to head out to the rugged west coast beaches to capture gorgeous scenes.

To find out our favourite location for shoots, as well as those of other premier New Zealand photographers check out Expedia’s recent article, ‘Photographers Share New Zealand’s Most Scenic Locations‘. The article also gives budding photographers great tips on how and when to click.

“The best time to shoot? Sunset, says Chelsea Haworth, when ‘the sky has incredible displays of blue, red, orange and pink’.” 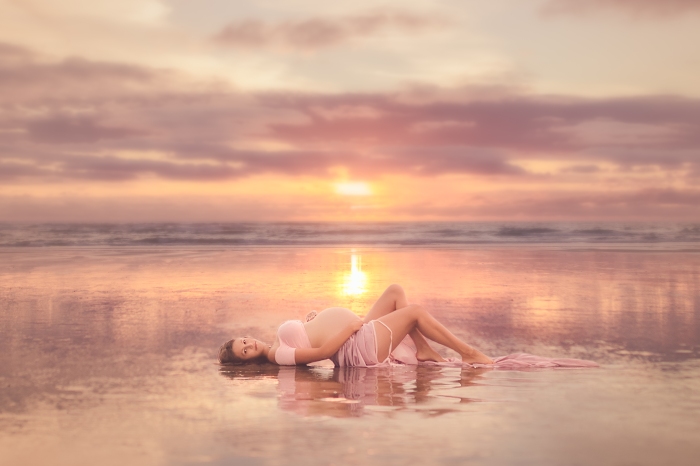 Wherever and whenever you find inspiration, New Zealand offers a plethora of great options for creative and gorgeous photo backgrounds.